I'm in a state of shock. Vasari is best known as the biographer for the great (male) artists of the Italian Renaissance - Michelangelo, Donatello, Raphael, Leonardo, etc. But did you know that Vasari mentioned four females in his Lives of the Artists? I had no idea, until I discovered Vasari's chapter on Properzia de'Rossi the other night. I seriously was dumbfounded - I stared at the word "sculptress" for at least ten seconds.

But don't get too excited, my feminist art historian friends. Vasari only mentions Rossi in a few paragraphs, and then taps on a few short sentences about three other female artists: Sister Plautilla, Madonna Lucrezia, and Sofonisba Anguissola. You've never heard of these artists, you say? Let me show you a sampling of their work: 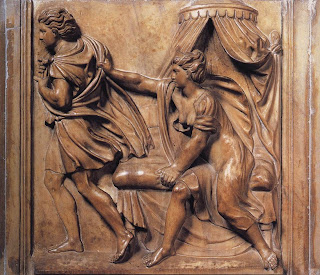 On the right is Properzia de'Rossi's Joseph and Potiphar's Wife (1520s). Vasari mentions that the subject matter of this panel can parallel the unrequited love that Rossi experienced in her own life. I think this comparison is telling about Vasari's views on women and feminine nature. The editor of my Lives edition also echoed my thoughts, saying that "while male artists execute works without regard to their personal feelings throughout the Lives, Vasari seems unable to imagine a woman creating a work of art without sentimental or romantic inspiration."1 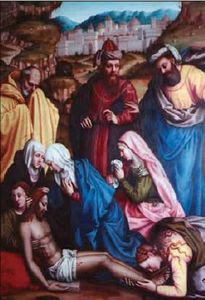 On the left is Lamentation with Saints (16th century) by Sister Plautilla (Plautilla Nelli). Vasari mentions that Plautilla was an extremely prolific painter, but surprisingly (or perhaps not-so-surprisingly), only three works are definitively attributed to her today. In an effort to bring public awareness to this artist, the Florence Committee of National Museum Women in the Arts paid to have Lamentation restored in 2006 (see news article here).

I think it's especially interesting that Vasari doesn't make any statements about Plautilla's divine role as an artist or God-given talent (which he makes about the male artists in his book). Instead, he stresses that Plautilla and the other ]female artists learned and acquired artistic skill. Futhermore, Vasari wrote this about Plautilla: "But best among her works are those she imitated from others, which demonstrates that she would have created marvellous works if, like men, she had been able to study and work on design and draw natural objects from life."2 Plautilla was alive when Vasari wrote her biography, and I wonder if she cringed to know that Vasari thought her best works were those that she copied from the divinely inspired, male artists. 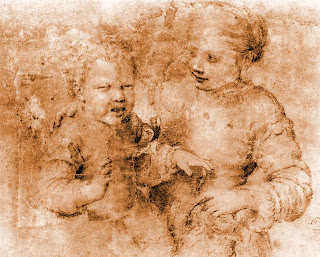 Madonna Lucrezia is the other female artist mentioned by Vasari. Unfortunately, there isn't any (known) surviving art by her. In fact, we know little about Lucrezia beyond that she was active around 1560 and her teacher was Alessandro Allori. It's sad to think that her work and life is lost to history, most likely because she was a female. I'm glad that Vasari made the effort to mention her and these other females in his Lives, but also disappointed that most females didn't receive artistic opportunity or art historical attention at the time. It makes me wonder what other female artists have been unappreciated and obscured by historical biases.

Is anyone else shocked that Vasari mentioned female artists in his text?