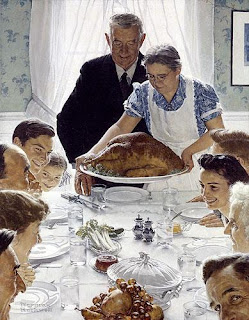 Happy Thanksgiving! I don't know too many works of art about Thanksgiving; I usually associate this holiday with Norman Rockwell's Freedom From Want (1943, shown above). Last week, though, I learned about another Thanksgiving painting while listening to Linda Nochlin's lecture at the SAAM. Nochlin talked about how Doris Lee's painting Thanksgiving (1935, shown below) has been described as "Rockwell-esque" and similar to Freedom From Want. Nochlin doesn't see too many similarities, and neither do I. Historically, the comparison doesn't make much sense, because Lee's painting precedes Rockwell's work by eight years. (I guess that if one was determined to make a comparison, it would be more correct to argue that Rockwell's painting is "Lee-esque.") 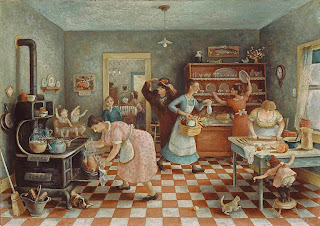 I like Lee's depiction because it shows all of the behind-the-scenes work that goes into the Thanksgiving feast. Perhaps I'm drawn to this painting because I'm cooking the turkey for the first time this year. (Gasp!) Nochlin pointed out that the food appears to miraculously appear on Rockwell's table, whereas Lee stresses the preparation that goes into a Thanksgiving meal. Nochlin also pointed out that all of the people in the painting are women, except for one lazy boy who stands aloof and watches everyone else work!

Although I think that these two paintings are dissimilar in style and subject matter, I do think that they both capture the excitement and sense of anticipation that is part of Thanksgiving. The bustling movement and energy of Lee's women is related to the energetic interactions between the people at Rockwell's table. And the man in Rockwell's foreground invites us to join in the fun, gazing outward with his twinkling eyes and excited expression. I think it is this sense of excitement that I like best about these paintings, and it's one of the things that I love about the Thanksgiving holiday.

Do you know of other depictions of Thanksgiving? What's your favorite part about the Thanksgiving holiday?
Posted by Alberti's Window at 2:29 PM