"Stealing the Mystic Lamb": A Review 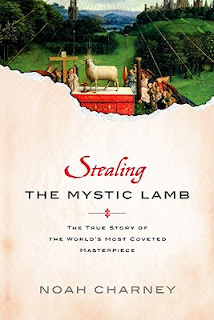 This past weekend I finally finished reading art historian Noah Charney's book Stealing the Mystic Lamb: The True Story of the World's Most Coveted Masterpiece. I've wanted to read this book for a long time, and I finally got my hands on a copy over a month ago. It took me several weeks to read this book, not because it was boring, but because I kept pausing to type notes on my computer. And now, with eighteen pages of notes in my computer files, I have finally finished the book. Phew!

This book recounts the troubled (and bizarre!) history of the Ghent Altarpiece by Jan van Eyck. Specifically, Charney deals with the many crimes (particularly thefts and attempted thefts) of this famous altarpiece from the Northern Renaissance. Historically, this work of art has been stolen and "coveted" more than any other work of art. I was particularly interested in how much of the altarpiece ended up in France during the Napoleonic era. During this time, the panels were put on display at the Louvre. The panels were undoubtedly seen in the Louvre by the artist Ingres, whose painting Napoleon on his Imperial Throne quotes van Eyck's image of God the Father.1

Although I liked all of the book, I think that I enjoyed the first half of the book a little bit more. In this first half, Charney races through several centuries of history in a lively discussion of the altarpiece's creation and thefts before WWII. I really enjoyed the quick, animated pace in the first few chapters. The latter half of Charney's book slows down considerably to focus on just one historical event: the theft of the Ghent Altarpiece by Nazis during WWII. The altarpiece panels, which were intended to be placed in Hitler's super-museum for art, were kept in the Alt Aussee mine in Austria. Although I thought that this story was still very interesting, it took a some mental adjustment to move at a slower pace in terms of chronology.

This book is fascinating and written with a very engaging tone. Aside from the change in pace, I only had one other teensy-weensy issue with Charney's book: I was really surprised to see that he referred to Jan van Eyck's The Arnolfini Portrait (1434) as a marriage scene.2 Since the marriage interpretation has been questioned by art historians for so long (and has been disproved in many ways), it ever-so-slightly undermined the quality of Charney's book. But that being said, don't let my nit-picky issue deter you from reading Stealing the Mystic Lamb. On the contrary, please read it. (Just know that I have crossed out the word "wedding" on a few pages. That's all.)

P.S. There is a great interview of Noah Charney on Three Pipe Problem. Be sure to check it out!