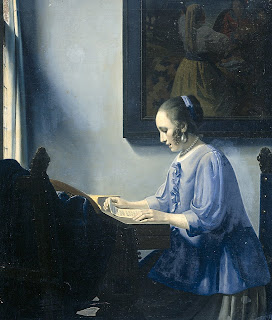 Van Megeeren was a master forger who spent much of his career making forgeries, particularly in the style of Frans Hals and Johannes Vermeer. Right now I'm reading more about Van Meegeren in the book, The Man Who Made Vermeers by Jonathan Lopez. It's a really interesting book and I highly recommend it. It's really fascinating to read about what forgers do to make their art convincingly old - the paint needs to have a certain chemical compound to imitate old oil paintings, and yet withstand the chemical tests that determine authenticity. Plus, the forgery needs to be created on the canvas of an old painting from about the same period - the forgery is painted on top of the ground layer of the original painting, so that the final product convincingly has the same craquelure. Forgers definitely are clever.

It's no surprise that as a forger, Van Meegeren latched onto the idea of creating paintings by Vermeer. During the latter half of the 19th century, Vermeer was rediscovered and celebrated within the art world. There are only 35 known paintings by Vermeer, which really isn't very many at all (by contrast, it's estimated that Picasso created around 50,000 works of art). Many scholars think that Vermeer did not create many more paintings than the ones that are known today. The last Vermeer paintings to be rediscovered were Woman Holding a Balance (rediscovered in 1911) and Girl with the Red Hat (rediscovered in 1925).1

These last discoveries took place during Van Meegeren's early career, and the art world was desperate to try and find more work by Vermeer. It's amazing to read how hungry museums and collectors were to snatch up "Vermeers" during all this hype - the Boijmans Museum in Rotterdam paid an enormous sum of around 550, 000 guilders for Van Meegeren's forgery of Supper at Emmaus (painted in Vermeer's early style).2 From what I calculated using this site, it looks like that would have amounted to around $4 million in today's currency.

Here are a couple of other forgeries by Han Van Meegeren: 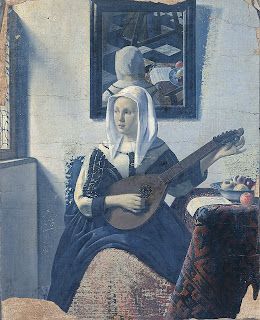 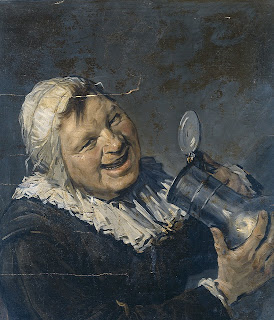 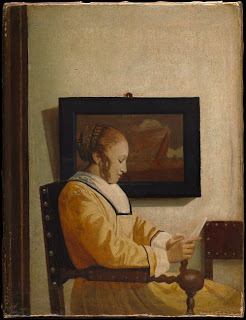 A Young Woman Reading, ca. 1926 (The Metropolitan Museum of Art) 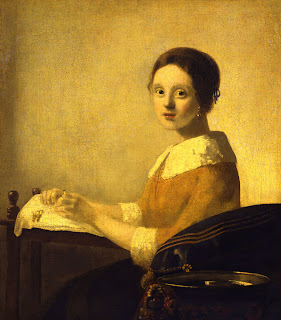 If you are interested in looking at more Van Meegeren forgeries, someone is starting to compile a list with images here. You can also read more about Van Meegeren's story and trial here.

So, what do you think of the forgeries? It's interesting to think about how authorship changes the value and reception of a forged work of art. Do you think that these works of art are not as good, now that they have been revealed to be the work of an imposter? Personally, I think that Van Meegeren had a lot of talent. But I think it's sad that he didn't utilize his talent to develop an original style. It takes talent to imitate the masters, but I think it takes more talent to create your own artistic niche.

2 Wayne Franits. "Vermeer, Johannes." In Grove Art Online. Oxford Art Online, > accessed 4 August 2009. It should be noted that Lopez' figures are a little different than this entry - Lopez writes that the price was 520,000 guilders, or about £58,000 (See Lopez, 139). Supper at Emmaus was purchased in 1937 by the museum, and its authenticity was not questioned until 1945, when Van Meegeren confessed his forgeries in order to exonerate himself from charges of selling national Dutch masterpieces to the Nazis.
Posted by M at 9:22 AM