A Little Skepticism over Discoveries

My friends, we either live in a very fruitful time for artistic discoveries, or something is out-of-whack.  Has anyone paid attention to how many works of art that have been recently discovered?  Just within this past year, there have been several works of art (or art-related discoveries, like Caravaggio's bones) that have been brought to public attention.  I'm sure that I haven't posted about all of the discoveries made within these past few months, but here are a couple that I pulled out of my archives (noted with their post date, not the discovery date): 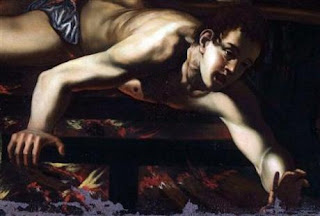 And now, just as of this month, there are two more possible discoveries to include in the list.  The Vatican recently reported the possible discovery of a new Caravaggio painting, the Martyrdom of St. Lawrence (see right).  I have to admit, I'm quite skeptical about this new "discovery."  Although I haven't seen the painting in person, some of the things look a little "off" to me.  I think the treatment of the blue drapery is a little unrefined, as well as the rendering of Lawrence's left arm and right hand.  But who knows?  I could be wrong.  I'm a historian, not a connoisseur.  Maybe I'm just skeptical as to why the Vatican is announcing this timely "discovery" during the celebrations marking the 400th anniversary of Caravaggio's death.  It seems a little too convenient, and I wonder if people are getting too hyped-up over Caravaggio to think sensibly.

The other work of art recently "discovered" was found in the basement of Yale University Art Gallery (see left).  The Guardian reports that this battered canvas, which was located in the museum basement, has now been attributed to Velasquez.  The Prado Museum is reserving judgment on the painting, and I'm tending to do the same.  When I read that this painting was discovered in the museum basement, I sarcastically thought, "Of course.  Of course it was discovered in the basement."  Maybe I'm too skeptical, but it seems like all museum directors would be interested in rummaging through their basement storage right now, ever since a possible Raphael was discovered in storage this past May.

What do other people think?  Are you beginning to get skeptical of these discoveries?  Or are you happy to embrace discoveries with open arms?  I sure like the idea of paintings being discovered, but starting to get a little wary...
Posted by Alberti's Window at 10:11 AM