Last week, I heard Maya Lin speak at the university where I work. Her lecture was uncannily appropriate, since I had planned for my students to learn about Lin last week (before realizing that she was coming to speak). Minutes after the lecture began, I had two distinct impressions: 1) Lin is extremely tired of speaking about the Vietnam War Memorial and 2) Lin has a lot of flexibility in her career, since she established fame and recognition so early in life. Really, because Lin already has public attention and a fan base, she can create whatever she wants; she isn't like many other contemporary artists, who seem to feel the need to be shocking or controversial in order to get attention.

One of my favorite parts of the lecture was when Lin discussed her ideas behind her earth art Eleven Minute Line (2004). This squiggly line is 1600 feet long and 12 feet high. And here's the awesome part: it's located in a cow pasture in Sweden. The first time I saw Lin's piece, it immediately reminded me of the Serpent Mound (c. 1070 AD) in Adams County, Ohio (shown below). The Serpent Mound is the largest effigy structure in the United States, and it is thought to have been built by the the Fort Ancient people. (It was originally thought that the structure was built in prehistoric times, but carbon dating of the mound revealed a much later date.) 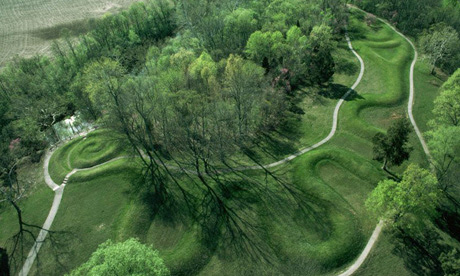 My suspicions regarding the connection between Eleven Minute Line and the Serpent Mound were confirmed during Lin's lecture. The artist is from Ohio, and she has always been struck with the story of the Serpent Mound. When Europeans came to America and discovered the Serpent Mound, they concluded that an earlier group of Europeans must have made the structure and then traveled back to the Old World. Basically, these European explorers could not conceive that Native Americans could have built something so complex and monumental. Lin decided add a subtle element of irony with Eleven Minute Line by turning the tables a bit: she brought a design that was inspired from the New World back to the Old World (i.e. Sweden).

It was a real privilege to hear such a well-known artist speak. I was glad that she discussed her more recent art, too. Are you familiar with Maya Lin's work (aside from the Vietnam War Memorial)? I think her interests in environmental/landscape issues are really interesting.
Posted by Alberti's Window at 10:34 AM