Enablers for "The Exotic" Experience

During the 17th-19th centuries, colonization and global expansion were growing trends in European culture. Although many Europeans enjoyed the benefits of colonization through imported goods (you do realize that British tea originally came from China, right?), most people would never travel to the exotic, faraway colonies that were claimed by their native countries. Instead, it is apparent that many people turned to fine art and the decorative arts as a way to visualize and experience the exotic. Really, the European view of what constituted "the exotic" was rather distorted from what the actual colonies were like. Travel accounts were a popular way for Europeans to learn about faraway lands, but the writers of these accounts often mythicized their subject matter, in order to make the story more interesting and marketable.

So, it can be argued that "the exotic" is really a European construct. Artists appealed to the interest in this construct by painting "exotic" subject matter. It's interesting to look at colonial art from this period, and see how it enables Europeans to experience the exotic (or, in truth, what Europeans perceived as exotic).

The Dutch colonists began to arrive in Brazil in the 1620s. Two Dutch artists, Frans Post and Albert Eckhout, were commissioned to artistically record the landscape, people, flora, and fauna of the new Brazilian colony. For the most part, Frans Post concentrated on painting Brazilian landscapes. Post focused on painting specific kinds of flora and fauna in his Brazilian paintings, which likely means that Post "intended his images to be true to the particular landscapes that he depicted."1

After leaving Brazil, Post continued to paint Brazilian landscapes. However, these later landscapes are not accurate or true-to-life depictions like Post's earlier works. Instead, these paintings are more imaginary and fantastic, which likely was due to the European demand for mysterious and exciting subject matter in exotic art. You can see Post's exotic elaborations in the detail of the painting, View of Olinda, Brazil (1662, shown above). Next to the tropical plants, Post includes a sloth, monkey, armadillo, anteater, and a lizard. There is no way that all these animals would realistically appear together, outside of their natural habitats. I think, though, that Post is using this artistic liberty as an enabling mechanism, so that the viewer can experience a saturated "exotic" experience. Interestingly, Post also used much brighter colors in his later landscapes of Brazil, which can tie into this stress on exoticism, since the bright colors could emphasize a striking contrast between the exotic world and Europe.

I mentioned that travel journals were an important aspect of creating "the exotic" construct. Since the time of Alexander the Great, Europeans found the O 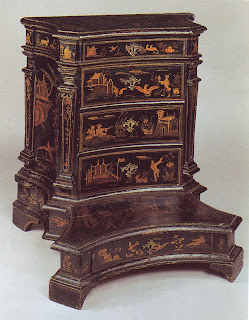 rient, particularly China, to be an idealized, paradisaical environment. Associations with as a type of Paradise, Garden of Eden, or Promised Land are implied in various travel journals which circulated at this time. Ultimately, was considered to be a “” by the Europeans, who perhaps would have been able to understand the various descriptions of the Orient better through this Christian perspective.2

I really like how some European religious furniture was decorated with chinoiserie (a Western European style that contained Eastern artistic elements). I think that chinoiserie can be viewed as an enabler for a Western worshiper to have an exotic (and more religious) experience. This Roman prie-dieu (18th century, shown above) is a kneeling bench that was intended for prayer. It is decorated with gilded chinoiserie designs on a dark green background. Even the top of the prie-dieu board is decorated in chinoiserie. Therefore, when a prayerful worshiper approached this piece, kneeling down onto the design, it would be as if he was placing himself within the chinoiserie landscape. In other words, due to the paradisaical connotations with the East, the worshiper could kneel and place himself in the exotic, celestial realm of God for the duration of his prayer. This association and transcendent experience could heighten the religious experience for the European worshiper, who could feel a more intimate connection with God while temporarily abiding in His heavenly environs.

Can you think of a better way for art to enable one to experience the exotic, than to invite the viewer to kneel and physically enter the exotic realm? I think this prie-dieu is awesome.

Interest in "the exotic" continued into the 19th century. Some painters, such as Delacroix, were interested in exotic subject matter of the East. Their paintings and interests created the movement Orientalism, a French facet of Romanticism. 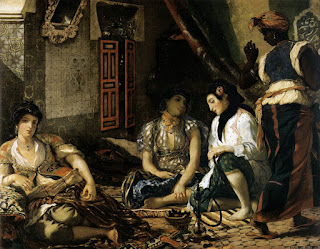 There is so much to say about this subject (for example, Linda Nochlin's feminist interpretation of Orientalist art is fascinating!), but I just want to mention one thing in regards to technique.3 I think it's interesting that Delacroix uses a painterly approach in his exotic painting, Women of Algiers (1834, shown left). It has been noted that, because of this tactile technique, Delacroix's figures are "redolent of the exotic, perfumed, and drugged harem atmosphere."4 I think that this is an interesting approach to enable the viewer to experience the exotic; Delacroix renders the paint to be tactile and visually-available, which perhaps makes the exotic experience seem within-reach of the viewer.

What do you think of "the exotic" construct and its manifestation in art? I wonder if such an exaggerated and incorrect view of a country (or culture) could exist today, since photographs and films are readily accessible to help one experience or learn about a faraway country. What do you think?