The Women's Studies Journal recently posted a call for article submissions regarding female art collectors. Here are some of the questions listed in the posting:

"Paintings and sculptures of women have long been objects of the collector's desire: what happens to this gendered dynamic when the collector is a woman? Is the drive to collect necessarily a masculine quality? What, if anything, is it to collect like a woman? Can collections be distinctively feminine? To what extent does a collection reflect its collector? What ethnic or feminist lenses may be applied to our understanding of these collections?"

(For anyone interested, the rest of the posting is found here).

I would really like to submit an article about Isabella Stewart Gardner. She was a fine art collector in the 19th-early 20th centuries and opened a museum of her collection in 1903. Today, the museum remains essentially unchanged since Isabella's death in 1924.

There are many aspects to Mrs. Gardner's life and collection that can be interpreted through a feminist lens. I think that the practice of art collecting is characteristically male, and it seems that Isabella also adopted (and perhaps flaunted?) some masculine characteristics aside from art collecting. She loved masculine sports like baseball and horseracing; the local newspapers were scandalized (and intrigued) by her behavior. Furthermore, Isabella's appellate was also masculine; she was referred to as "Mrs. Jack" ("Jack" was her husband's nickname).

However, for all of the masculine characteristics that Isabella exhibited, I think that the display and maintenance of her art collection lends itself to feminist interpretation. Specifically, I would argue that Gardner's museum (and consequently Isabella Stewart Gardner herself) resists outside control and change, which I think can be extended to a rejection of the controlling "male gaze." (I have written a little more about the "male gaze" here). Isabella stipulated in her will that the museum needs to be permanently exhibited according her aesthetic vision. I think that because the museum remains unchanged, Gardner still remains part of the female "subject" that visitors see when they come to the museum. If her art collection was to be moved around and changed, Gardner would shift from being a powerful female "subject" to a female "object" - and consequently all of the paintings in the room would become "objects" instead of embodiments of Gardner and her aesthetic taste.

Because of Isabella's will stipulations, the museum has remained unchanged since her death. Even when several masterpieces were stolen (a loss that amounted between $300 and $500 million - the biggest art heist in history!) from the museum in 1990, the museum maintained the same display (with empty frames where the stolen paintings were once located). Today, these empty frames still remain, since the crime was never solved. (You can read a little more about the crime here). 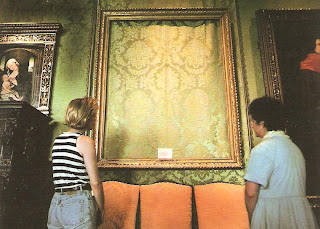 Even with these absent paintings, I think that the frames still function to represent the "subjecthood" and female control of Isabella Stewart Gardner.

What do people think about female art collectors and Isabella Stewart Gardner? How would you respond to some of the questions put forth by the Women's Studies Journal?
Posted by M at 10:13 AM