The Artist Had Never Seen a [Insert Animal] Before

It's always interesting to see how an artist depicts an animal that he/she has never seen. Vasari writes that Paolo Uccello wanted to depict a chameleon his Four Seasons, but since the artist had never seen a chameleon, he opted to draw a camel instead.1 I guess you can kind of see Uccello's logic in picking a camel, since camaleonte and camello are similar words in Italian (the two words are a little similar in English, too). I wish that Uccello's Four Seasons still existed; I'd love to see what that chameleon/camel looked like.


Durer attempted to depict a rhinoceros, even though he had never seen one. He really didn't do too bad of a job (see woodcut print The Rhinoceros (1515) on the right), although the armor-like plates are a little funny. Durer became interested in the rhino after seeing a sketch and reading descriptions in a letter from Lisbon.2 The year that Durer made this print, 1515, was a big year for rhinoceroses in Europe. Both the king of Spain and king of Portugal were trying to win the favor of the pope by giving him rhinoceroses. The pope apparently liked the West African rhino (the gift from Spain) best, which allegedly answers why the pope gave more New World territory to Spain.3 I bet that Durer was trying to maximize on the interest in rhinoceroses during this year, since woodcut prints can be widely distributed, popularized, etc.

There are other animal depictions which I think are amusing. When writing my thesis, I would often chuckle at Aleijadinho's depiction of a lion. Since the Brazilian artist had never seen a lion before, he sculpted this one with the face of a monkey: 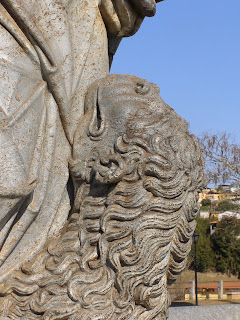 And you have to love Aleijadinho's great attempt at a whale. I especially love the whale's two spouts (kind of like nostrils, I guess) and fins: 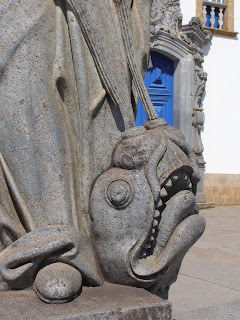 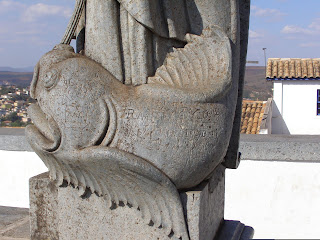 I know there are lots of other interesting/creative/bizarre depictions of creatures that have resulted from the artist never seeing the actual animal. What ones do you know? Do you have a favorite? Let's see who can give the most bizarre example...

2 "The Rhinoceros," in Web Gallery of Art, available from The Soul of the Rhino (Guilman, Connecticut: Lyons Press, 2008), 137. Available online here.
Posted by Alberti's Window at 1:55 PM